Zun is a kind of bronze wine holder in ancient China. It usually has a round belly, a huge mouth and a hoop foot. There are many kinds of shape, animal shape of the most image, realistic. In the National Museum of China on the collection of a unique shape, exquisite workmanship of gold and silver moire copper rhinoceros statue.

The bronze rhinoceros statue, 58.1 cm long, 34. 1 cm high and weighing 13.5 kg, is very lifelike. It was a strong, muscular rhinoceros, standing with its head up, its pointed horns straight up, its eyes staring intently ahead. The rhinoceros' beaded eyes are small, but bright. Four stout legs support a strong body. Although it is made of bronze, every part of the rhino's body has a strong texture: cheekbones and elbows protruding, as if you can feel the shape and rise of the bone through the skin; The flesh of the mouth and belly is thick, but strong and elastic.

Copper rhinoceros Zun is a wine vessel of the Western Han Dynasty. On the back of the rhinoceros, there is a live cover shaped like a saddle, which can be opened and closed. The abdomen of the rhinoceros is empty, which can store wine. The whole design is exquisite, the structure is reasonable and practical. In ancient China, there were a lot of wine statues in the shape of animals, such as elephant, ragzu, owl, foal, rabbit, duck, dragon and tiger, bird, etc., while those in the shape of rhinoceros were very rare.

During the Spring and Autumn Period, it was very rare to make utensils for daily life with the technique of gold and silver. But in the Warring States, Qin and Han dynasties, it began to be widely popular, Xu

Most of the daily bronzes used by the nobility were covered with gold and silver, among which the statue of copper rhinoceros is an outstanding representative.

Because the bronze rhinoceros statue is so realistic, experts concluded that the maker must have seen a rhinoceros. Were rhinos ever found on Chinese soil during the Western Han Dynasty, more than 2,000 years ago?

Rhinoceros is a rare wild animal that lives only in South Asia and Africa. There are no wild rhinos in our country now, but in ancient times, rhinos lived in large numbers in our country.

Rhino bones have been unearthed at Hemudu Neolithic site in Yuyao, Zhejiang Province. Rhinoceros live not only in the south, but also in the Yellow River valley in the north. Rhinoceros can be found in the animal bones unearthed from Yin ruins in Anyang, Henan Province. According to oracle bone inscriptions, King Wuding of the Shang Dynasty hunted and captured 71 rhinos at one time. It can be seen that rhinos existed in large numbers in the Yellow River Basin at that time.

Rhinoceros, because of its tough leather, was often used to make armor. During the Spring and Autumn Period and the Warring States Period, rhinoceros armor was the equipment that warriors of all countries longed for. But due to the population growth, uncontrolled development, a large number of wild animals are killed, the number of rhinos is rapidly decreasing. By the late Western Han Dynasty, rhinoceros were very rare in China. However, at that time, the rhinoceros paid tribute from southern Guangdong and western regions were kept in captivity together with lions and elephants in the royal park. Therefore, during the Western Han Dynasty, the makers of the bronze rhinoceros must have made their wares according to the image of a real rhinoceros.

Reading ancient Chinese books, people will be surprised to find that rhinos are closely related to ancient Chinese civilization. For example, "Shi Xi Town Water" is one of the familiar ancient customs. Ancient people believed that rhinos were spiritual animals and could cure water problems, so there is an ancient custom of "Shi Xi Town Water" in many places in China.

In ancient times, people in addition to the rhino as a water spirits and ancient totem, but also as a good thing to ward off evil. The court nobles of the Western Han Dynasty made many bronze wine vessels for lions, elephants and rhinos in order to ward off evil spirits and welcome good fortune. Therefore, there is a bronze rhinoceros such national treasures handed down to later generations.

The bronze rhinoceros statue was excavated in Shaanxi province in 1963. At that time, the statue was buried in a pit alone, and its origin was shrouded in mystery because it had no inscription and no other cultural relics to go with it. Later, according to experts' research, the bronze rhinoceros statue should have been a noble ritual vessel in the Western Han Dynasty. It was a great treasure for the temple and the imperial court. It was not enjoyed by the people and had high ornamental value and collection value.

The bronze rhinoceros statue is exquisite in workmanship and lifelike in shape. The gold and silver color match with the copper base color, which is a good example of the organic combination of utility and beauty in ancient Chinese handicrafts. In particular, the whole body is painted with gold and silver moire, exquisite and gorgeous, but also full of vitality, which can be called a wonderful flower among Chinese Han Dynasty bronzes. 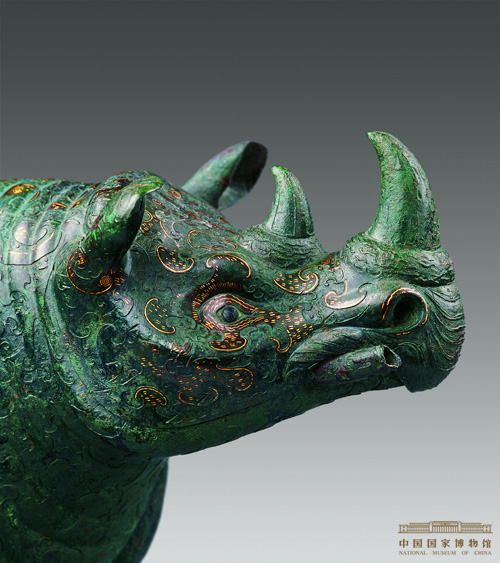